FROZEN THE MUSICAL : Tickets from £20 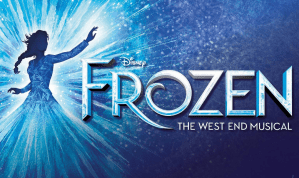 Set the magic free with Disney’s spectacular FROZEN. The award-winning musical brings to life a world of sumptuous beauty, humour and iconic music in a jaw-dropping production to melt hearts of all ages.

When Queen Elsa’s hidden powers plunge the land of Arendelle into an eternal winter, her sister Anna sets out to find her and save the kingdom before it’s too late. But as the storm rages on, both sisters must learn that only an act of true love can thaw a frozen heart.

FROZEN will defy all expectations on an unforgettable journey packed with thrilling surprises, hilarious characters and soaring music, including twelve new songs written especially for the show, alongside all the classics such as ‘For the First Time in Forever’, ‘Do You Want to Build a Snowman?’ and the worldwide smash-hit, ‘Let it Go’.