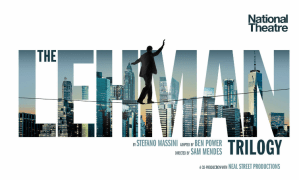 The Tony Award-winning Best Play makes a triumphant return to London’s West End following an acclaimed season in Los Angeles and a highly lauded run on Broadway. The Lehman Trilogy stars Michael Balogun (Death of England: Delroy, Macbeth), Hadley Fraser (The Antipodes, Coriolanus) and Nigel Lindsay (The Pillowman, A Small Family Business) as the Lehman brothers, their sons and grandsons. Hailed by The New York Times as a ‘genuinely epic production,’ The Lehman Trilogy is the story of a family and a company that changed the world.

On a cold September morning in 1844, a young man from Bavaria stands on a New York dockside dreaming of a new life in the new world. He is joined by his two brothers, and an American epic begins. 163 years later, the firm they establish – Lehman Brothers – spectacularly collapses into bankruptcy, triggering the largest financial crisis in history.