Book a flight to Zagreb 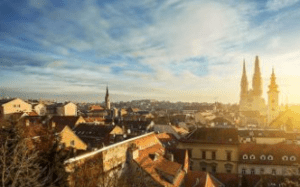 Fly to Zagreb and discover one of the greenest cities in Europe and home to some of the continent’s most ambitious architecture. A welcoming, laid-back people live among the proud 18th- and 19th-century buildings and verdant public parks, and the city has also earned a reputation as a cultural hotspot.

Book a flight to Zagreb with Qatar Airways, and marvel at an elegant, Eastern European masterpiece, as you amble through lush parks, or peruse museums’ art and antiquity.

Stone Gate and the medieval Lotrščak Tower introduce you to the old-world glamour of Croatia’s capital; but Zagreb’s greener side can be seen in its many parks, especially those of the Lenuci Horseshoe.

Zagreb is old-world opulence at its best, full of imposing 18th- and 19th-century stone structures, bedecked with arches, columns and other exquisite details.

If you want to see an early example when you first travel to Zagreb, head to the Stone Gate, Zagreb’s medieval entrance to Gradec Town. A medieval counterpart to the gate is Lotrščak Tower, which offers 360-degree views of both the upper and lower towns. To make your trip between the two towns of Zagreb, use the nearby funicular railway. This is the shortest cable car system in the world, at only 66m long, and has been transporting the citizens of Zagreb between the Upper and Lower Towns for the past century.