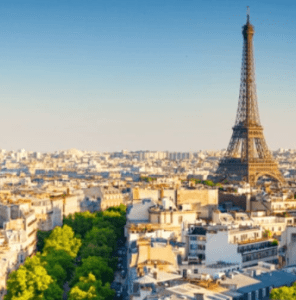 The average train time from London to Paris is 2h 20m, although it takes just 2h 16m on the fastest high-speed Eurostar services. There are around 15 trains per day running from London in the UK to Paris in France, passing 246 feet under the Channel Tunnel (also known as the Chunnel) on its way between capital cities. The first train leaves London St Pancras International station at 05:40 and the last train leaves at 20:01.

Why fly when direct high-speed trains can whisk you from the centre of London to the centre of Paris in less than two and a half hours – that’s quicker than flying when you take airport transfers and waiting around in the terminal into account – plus it’s much better for the environment too. Hop on a train and you’ll be in a patisserie living like a local in no time at all.